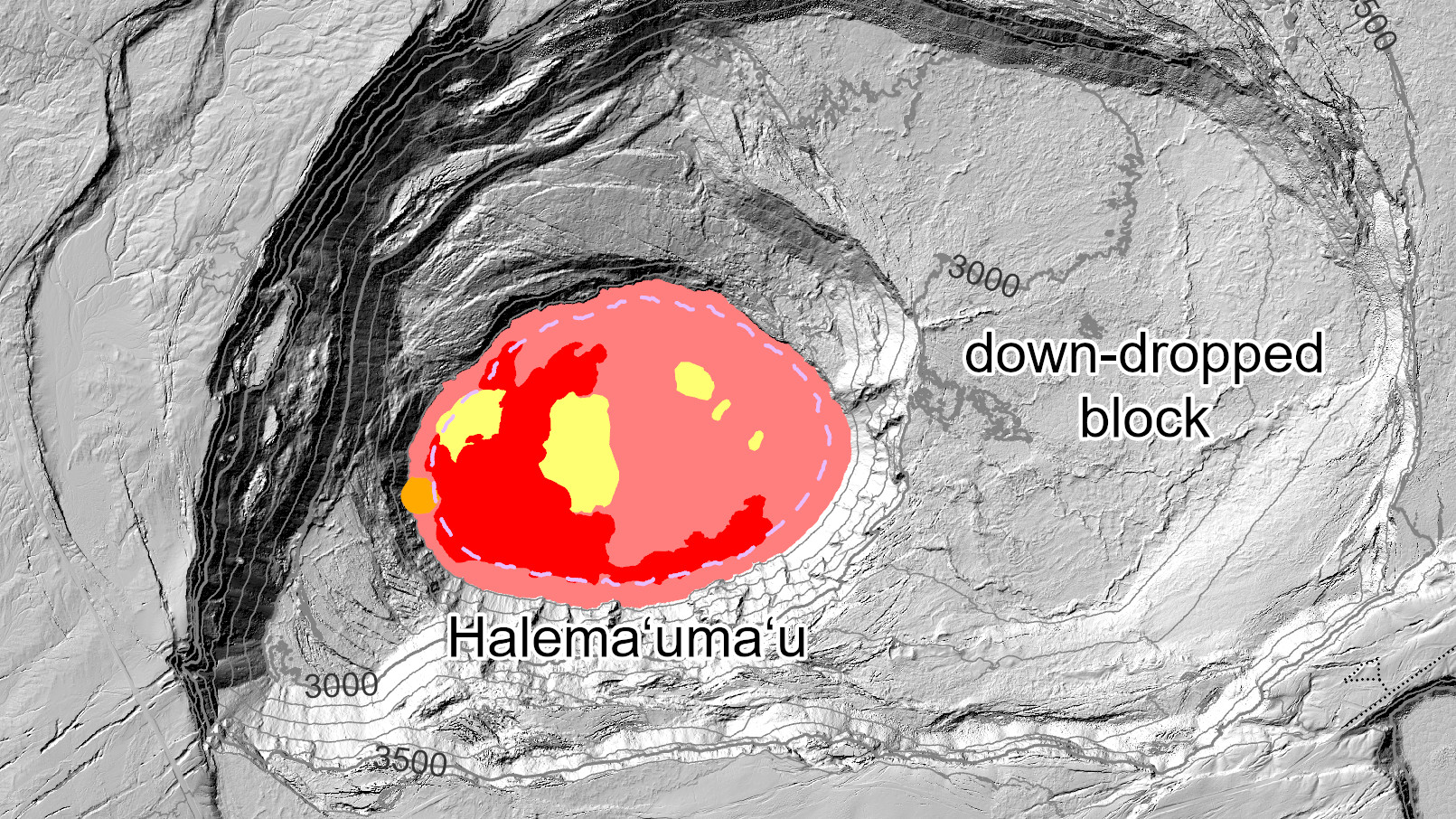 USGS: “Photo of the western edge of the Kīlauea caldera looking down at the western vent feeding the lava lake at Halema’uma’u. Splashes are projected 5-10 m (16-33 ft) high from the west vent onto the walls of the cone that has formed around the lava fountain. The small pond inside the cone is about 2m (7ft) higher and forms a small waterfall to the larger lava lake. (USGS photo by D. Downs)

(BIVN) – Kīlauea continues to erupt at the summit, with all lava activity confined to Halema’uma’u Crater in Hawai’i Volcanoes National Park.

“No significant change observed in summit tilt or GPS observations; the summit slope was flat for the past 24 hours, ”the USGS Hawaiian Volcano Observatory reported on Wednesday. “The seismic activity remains below background noise and the volcanic tremor has remained high since the start of the eruption.” Sulfur dioxide emission rates remain high and were last measured at around 2,700 tonnes per day. 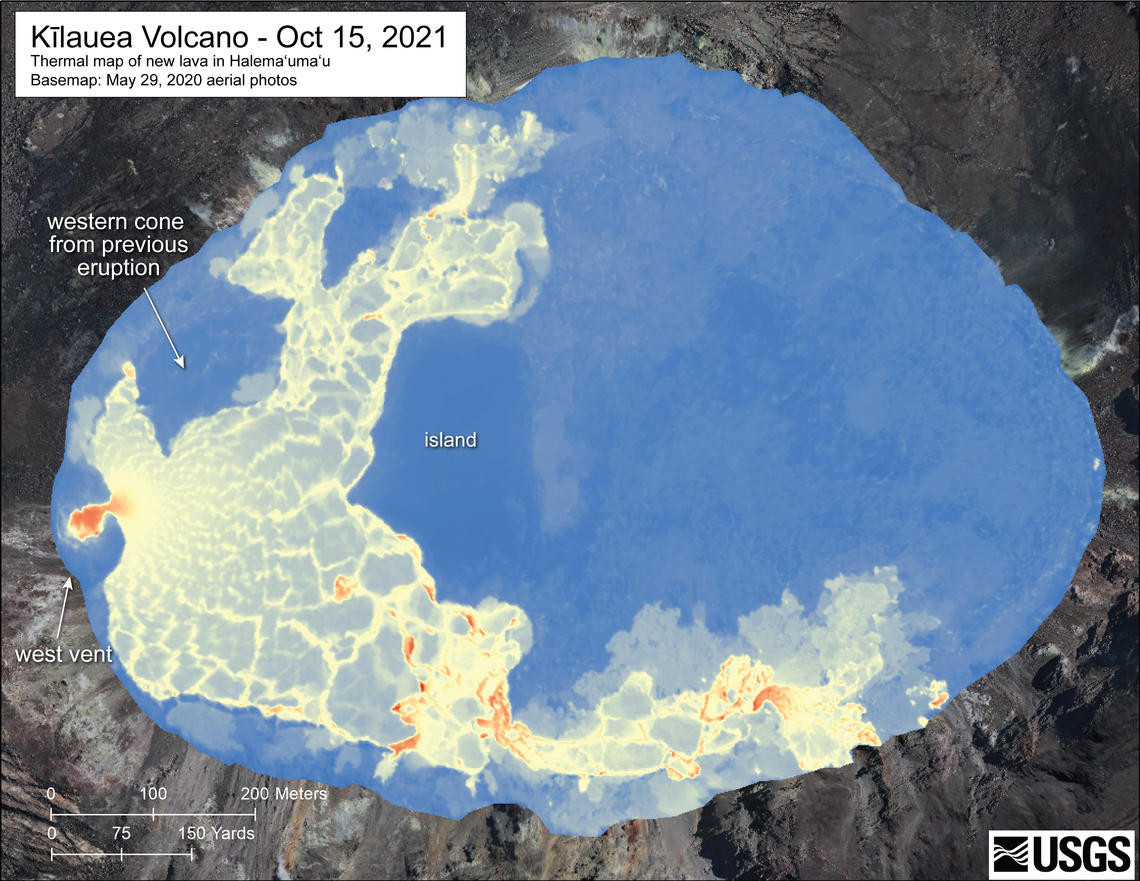 USGS: “This detailed heat map of Halema’uma’u Lava Lake is an enlarged version of the larger map above, constructed from images collected during a helicopter overflight on October 15, 2021, at approximately 7:30 a.m. HST. The heat map scale ranges from blue to red, with blue colors indicating cooler temperatures and red colors indicating warmer temperatures. The only active eruptive vent remaining at this time is the west vent; several hot spots in the southern part of the lava lake correspond to short lava cascades between the upper western half and the lower eastern half of the lake. (USGS map by Mr. Patrick)

Based on observations of today’s Halema’uma’u lava lake, as reported by the USGS:

Lava continues to emerge from a single vent in the western wall of Halema’uma’u Crater. The western end of the lake showed a maximum elevation of about 790 meters (2,592 ft) above sea level when measured by field crews on October 19, representing an increase of 1 meter (3 ft) from October 17, 2021, measurement and a total increase of about 46 meters (151 ft) since lava emerged on September 29. The total erupting volume since the start of the eruption was estimated to be around 19.9 million cubic meters (5.3 billion gallons) on October 15. The west vent had constant fountain heights of up to 9m (30ft) with occasional bursts up to 14m (46ft) observed by field crews on October 19. The lava lake is not level over its entire surface due to the location of the vent at the western end. The western quadrant of the lake is approximately 2 meters (6.6 feet) higher than the active south lobe, 3 meters (9.8 feet) higher than the active north lobe, and there are approximately 7 meters (23 feet) of difference in altitude between the active west and the stagnant eastern part of the lake. 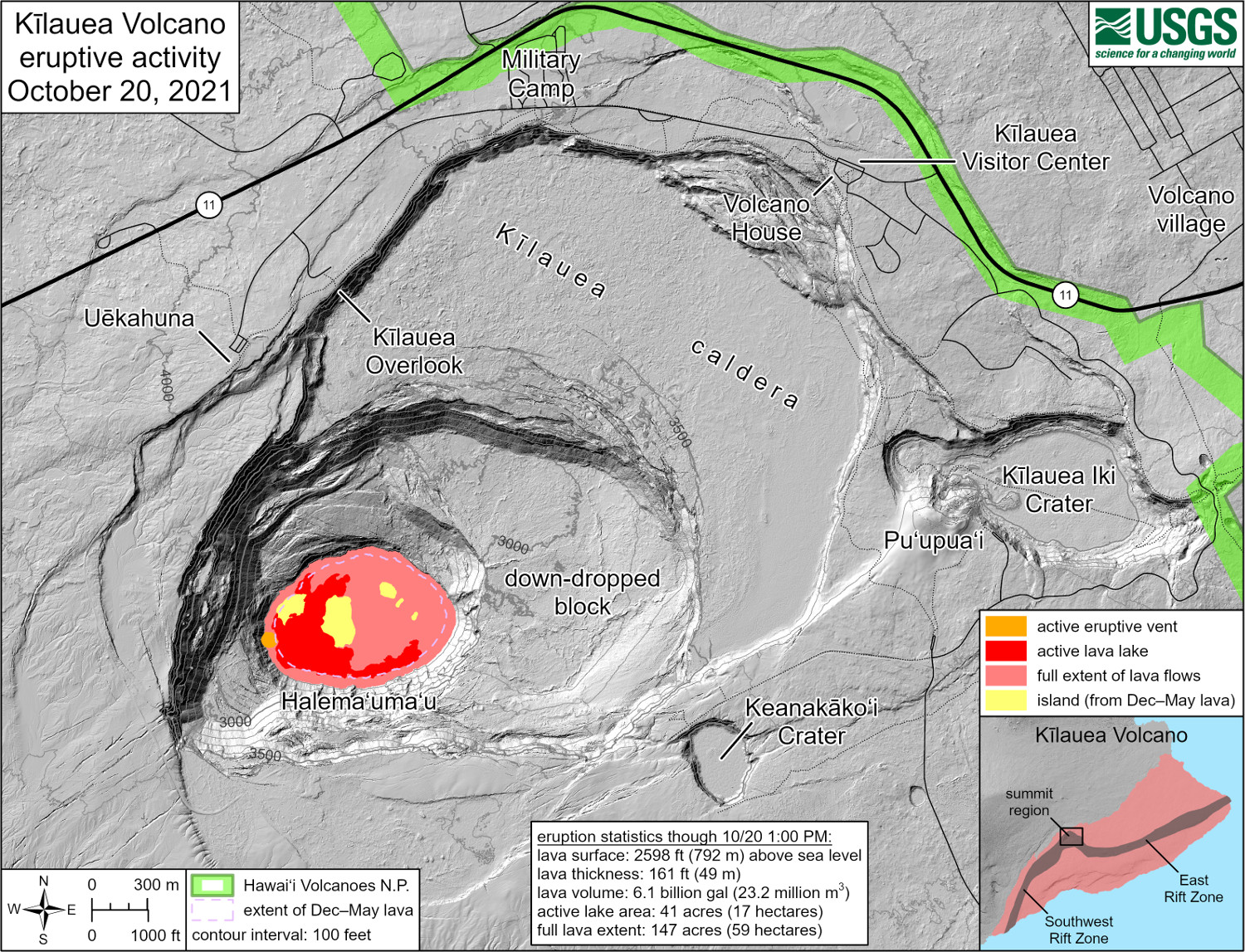 USGS: “This reference map represents the ongoing eruption of the summit of Kīlauea on October 20, 2021. Only one eruptive vent is active in Halema’uma’u at this time, along the western edge of the rising lava lake. Similar to the last eruption – from December 2020 to May 2021 – the eastern end of the lava lake has stagnated and solidified, and is several meters lower than the still active western end. Note that this map represents contour elevations in feet, with the surface of the active lava lake now at approximately 2,598 feet (792 m) above sea level. At this time, active lava is visible from two public viewpoints in Hawai’i Volcanoes National Park: a site along the trail between Kīlauea Overlook and Uēkahuna can see the southeast edge of the lava lake and a section of the Keanakāko’i Overlook can see fountains with eruptive vent. (USGS card) 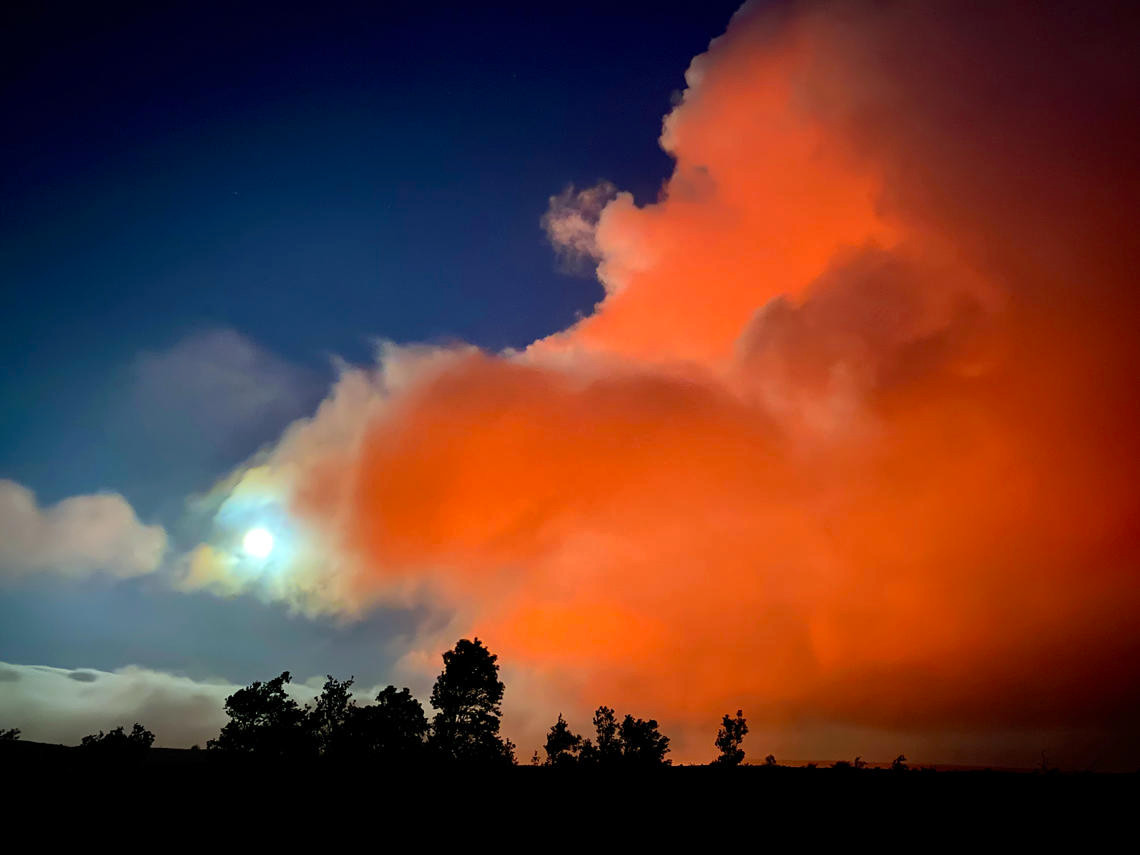 USGS: “At 7:00 p.m. HST on October 19, 2021, the glow from the Halema’uma’u lava lake colored the gas plume from the erupting west vent red. Meanwhile, the moon was rising in the east, further illuminating the scene above the summit of Kīlauea. The photo was taken from the old crater rim drive on the west side of the crater. (USGS photo by J. Schmith)