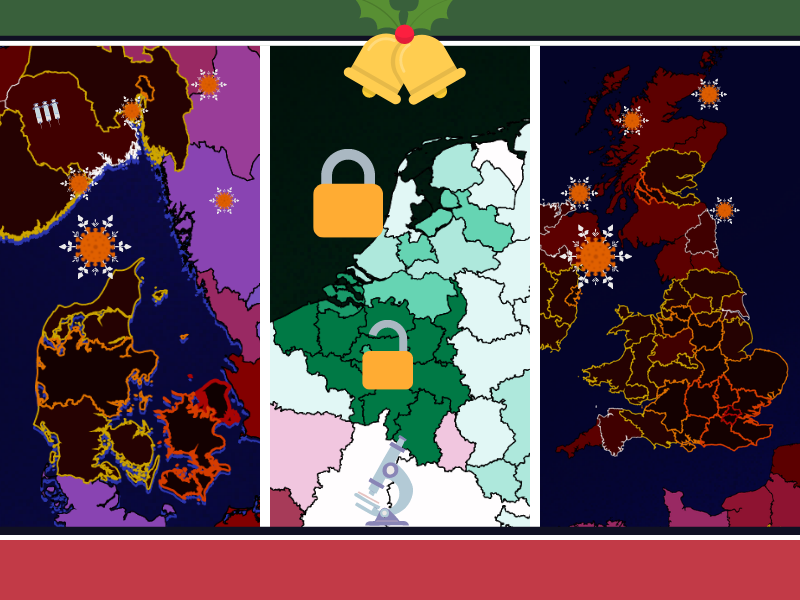 Corona in Europe – Why is the Netherlands blocked?

Will the Delta variant cross into the New Year? Since Omicron’s advance, this seems extremely unlikely. As Christmas approaches, Europe is the scene of the highest infection rates in the world for the second year in a row. To cope with the next peak of infection, governments are increasingly tightening the reins. In Sweden, seating is compulsory in restaurants, Belgians are no longer allowed to go to the cinema and in Spain, a face mask is compulsory in all indoor and outdoor public places. Nowhere does it go so far as in the Netherlands, which have been almost completely locked up since Sunday. Why is it?

Still, the results of early studies on the effects of Omicron seem cautiously optimistic. At least for individual patients. Experts from the United States, South Africa, Denmark and Great Britain generally agree that the risk of hospitalization is much lower. Nevertheless, inferior is not equal zero. The fact that even moderate rates can create unmanageable problems for healthcare systems has been confirmed by millions of corona patients over the past two years.

The problem with Omicron is that vaccines – especially without a booster shot – don’t work as well as they should, leaving hundreds of millions of Europeans, young and old, vulnerable to yet another viral attack. Because one thing is now certain: this variant will cause extremely high infection rates. The consequences of this must be exceptionally light to avoid overloading intensive care units.

Your Weekly Innovation Snapshot Every Sunday, the best articles of the week are delivered to your inbox.

Take note of the slider below for Denmark and UK. This is where this variant is now dominant. Just four weeks ago, our continent was still dominated by Delta.

Due to its completely different characteristics, it is as if the rules of the game for this pandemic are completely upside down. Copenhagen and London had the questionable premiere earlier this month. In just seven days, Omicron infected around 2,000 out of 100,000 people, or 2% (!) Of the population. In the meantime, he also took control of this other British island and Norway. Spain and France seem to be next on the list.

In fact, the slider graph shows the prevalence of two pandemics at the same time. Where is Delta still sweeping? And where is the impending rise of Omicron? It becomes clearer with this last-week-against-this-week graphic. As Omicron spreads much faster, this map also reveals regions colored in deep pink. In green regions, the number of new reports of infections has decreased. The longer term trend is visible on the heat map.

Although the rules were tightened up virtually everywhere, nowhere did it go as far as in the Netherlands. Quite remarkable since our country does not really stand out when it comes to infection rates. So why are the other Premier League stadiums always full and the Dutch Premier League has had to play without an audience for weeks? Even in decidedly more conservative Denmark, a pub drink is still possible with a few additional rules in place.

On the basis of incidence rates alone, the baseline position of the Netherlands actually appears to be above average. Even on the slider chart comparing the situation to four weeks ago, there are virtually no red areas. Is it proactive forward thinking, frenzied fear-mongering, a tactful decision with the arrival of a lewd Omicron on the horizon, or the only option left as the toolbox of solutions is empty?

Based solely on the number of infections, the Netherlands is by no means in such a bad state. However, the decline among Belgians is much stronger even if they have taken much less drastic measures. Due to a combination of factors, this is also not necessary now. The waters are not as rough for the Belgians as for their neighbors to the north. And that’s not quite because of the extensive ventilation in all public buildings that has been mandatory there since this summer.

Is a decrease in the number of reported cases the same as a decrease in the number of infections? Not necessarily. The number of “infections” counted in the incident lists and cards is a consequence of the testing capacity. Those who test sparingly will also find few new corona cases to include in their statistics. This does not mean, however, that the virus spontaneously disappeared. On the contrary: the danger in countries that do not test enough is to lose an overview of the spread.

How is it possible that in the Netherlands the percentage of positive tests has far exceeded 20% for weeks, while the number of new cases reported has almost halved? According to the WHO, a country should step up if the normal value of 5% of positive tests is exceeded.

Between December 6 and 12, 453,802 corona tests were administered in the Municipal health services (GGD), according to data from the Netherlands Institute for Public health and environment (RIVM). It may sound like a lot, but it is often the case with large numbers. How much is it really? Not much if we compare the figures of the Danish Serum Institute Statens. Their data dashboard shows how in the Scandinavian country, which has only 5.8 million pairs of nostrils, a test swab has lifted a nostril 244,650 times. Within a week? No, in one day. In week 50 that figure was almost 1.5 million (!)

In addition, in order to be able to keep up with Omicron, over the past four weeks the Danes have increased their testing capacity by an additional 400,000 PCR tests per week. The exact opposite has happened in the Netherlands. Testing is now more often done at home using a commercial rapid test that is not officially reported. In one month, the number of PCR tests performed has grown from around 650,000 in mid-November to just over 453,000. Does that make us the worst kid in the class? Well if Our world in data is to be believed.

For every head of the Dutch population, two Belgians, four French and no less than thirteen Austrians are tested in a test track of their respective government agencies.

Why are some countries testing more? It’s not just about tracking those infected, but also monitoring the spread of the virus in society so that swift precautions are taken in policy decisions and incisive tracking and traceability steps can be taken to detect and eradicate epidemics.

Partly due to insufficient testing capacity, the monitoring and traceability policy never really got started here, any countermeasures were hampered by a thick fog of dissent and action was systematically taken too late at a time. when hospitals were already teetering on the brink of Code Black for weeks. Because that left no capacity to cope with Omicron’s new uncertainties, the government pushed on the draconian emergency brake on Sunday.

However, the evening lockdown, the convenience of home testing and oxygen tanks to keep hospital beds free couldn’t prevent the risky balance from suddenly tipping over in the week leading up to Christmas. The Netherlands have played and lost. Omicron or not. It would never have lasted long, by the way, as the other elephant in the room is starting to attract more and more attention. If you open a diary you might notice that it has a lot of death notices related to family lately.

In the third week of December, there were 950 more deaths than usual. Is it due to the delay in reminders, the postponement of care that should not have been postponed any longer, the lack of hospital beds or nursing staff? The Netherlands also reported an above-normal death rate of 30% in previous weeks. This has made us the highest in Western Europe for quite some time. It is obvious.

Only Austria comes close to the excess mortality rate in the Netherlands. It was Code Black there last month, which left the government with no choice but to shut down the company for three weeks. In the meantime, a ramp-up in testing capacity, a very strict 2G policy, a mandatory quarantine for winter sports enthusiasts and a significant acceleration of the recall campaign are supposed to prevent any further aggravation. Since then things have improved a bit there, the tightest restrictions have been lifted and they believe they can face a viral Christmas hit.

While Omicron’s role in the Netherlands is still limited, we’re heading into Christmas weekend with the heaviest restrictions in all of Europe. How limited exactly? It’s hard to say with the limited testing capacity and poor germline monitoring. The big picture of the spread has been completely lost with extremely high excess mortality rates as a dismal and entirely explainable result. What the Dutch waters have been unable to do for decades, Delta has done in the land of Delta Works in a matter of months. Next week, his successor will take over. Hopefully, this dominant variant of Covid will have more pity on the builders of Delta Works than its ruthless cousin with the same Greek letter whose days are now happily numbered.

In any case, the new Dutch cabinet starts the new year in good spirits for the next round. How exactly do they intend to get the country out of the corona crisis? No idea. There are a lot of things the Netherlands is unwilling to do. But in any case, no 1G policy as in Portugal, no 2G policy as in Austria, no external masks as in Spain, no ventilation in the hotel sector as in Belgium, no compulsory quarantine hotels as in Grande -Brittany, no FPP2 masks like in Germany, no large-scale tests like in Denmark, no ban on alcohol like in Norway, no compulsory seats in the hotel sector like in Sweden, no compulsory vaccination as in Italy, no compulsory masks in classrooms as in France and also, no small classrooms as in Finland.

When a country’s corona politics are mostly debates about the policies you don’t want, there is only one option left – hard and comprehensive foreclosure like in the Netherlands. What no one absolutely wants.

So what does the Netherlands really want? Boosters! Because after three months, the upper arms finally receive a third injection. But we still have a very long way to go to catch up with the rest of Europe. Which, given our experiences with our slow start at the start of this year, will likely work out just fine at the end. So let’s not let this excess mortality put a stop to it, the orange nation should even do a little better at the European Championships in December!

Merry Christmas to everyone! Don’t make him too miserable, but certainly not too happy either!